That was the year that was: THEATRE

The recent criticisms surrounding this year’s short play festival, Short & Sweet at the Arts Centre, which reverberated throughout the Blogsphere, was one of the major stories in ’s performing arts sector this year. Rather than rehash recent columns, I refer you to Alison Croggon’s informative and insightful blog Theatre Notes for the full story.

Also at the Arts Centre, the success of the FULL TILT program proved that the real creativity in ’s theatre scene is definitely happening on the fringes. That said, the Melbourne Theatre Company proved that their middle-of-the-road reputation was not necessarily deserved, thanks to their staging of Festen, an unsettling play by David Eldridge adapted from the Dogme film of the same name.

Elsewhere, the Store Room Theatre re-opened after being dark for too long, re-branding itself as the Store Room Theatre Workshop, and also installed air conditioning, thank the Muses; while the legendary La Mama Theatre, established in 1967, was put on notice by one of its major funding bodies, the Australia Council for the Arts. 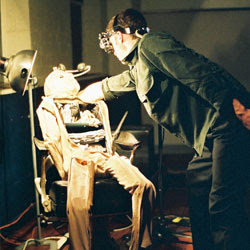 My personal performance highlights this year included a star turn by iOTA in the local production of Hedwig and the Angry Inch at the Athenaeum Theatre; the visceral and moving Operation by Blood Policy (pictured left) which combined actors and puppetry to dazzling effect at Next Wave Festival; and the magnificently macabre Rubeville by Northcote’s Black Lung Theatre, presented during the Melbourne Fringe Festival.

I also enjoyed the restaging of Ross Mueller’s almost perfectly realised Construction of the Human Heart at the Malthouse’s Tower Theatre; Angus Cerini’s inspired and confronting Saving Henry v.5 at the Arts Centre; and Headlock, a visceral, vibrant and touching exploration of masculinity by Kage Physical Theatre, also at the Malthouse, and one of the few stage shows this years that engaged me emotionally as well as intellectually or aesthetically.

On the downside, I walked out of Bell Shakespeare’s Romeo and Juliet, which lacked anything resembling pathos or passion, let alone chemistry between its romantic leads; and Gorkem Acaroglu's stridently political The Habib Show at Theatreworks (picture, right) failed spectacularly in its attempt to transplant documentary theatre onto the Australian stage.
Posted by richardwatts at 5:51 pm